How to Treat and Control Pond Algae

Before you panic upon seeing a buildup of algae in your pond, keep in mind that algae are a completely normal part of any organic pond ecosystem. A small amount of algae in your water feature is perfectly okay! In fact, it’s a sign of a healthy ecosystem. Algae only become a problem when the growth becomes excessive and therefore difficult to manage.

The main goal in keeping clear, healthy water is not to completely rid your pond of algae, but rather to keep it in balance with nature. Dealing with excess algae growth doesn’t have to be complicated. Avoid certain behaviors and incorporate a few treatments to keep it under control.

Before treating, it’s important to understand the two most common forms of algae seen in backyard water features. It’s also important to know the causes, prevention methods, and solutions to excessive algae growth. 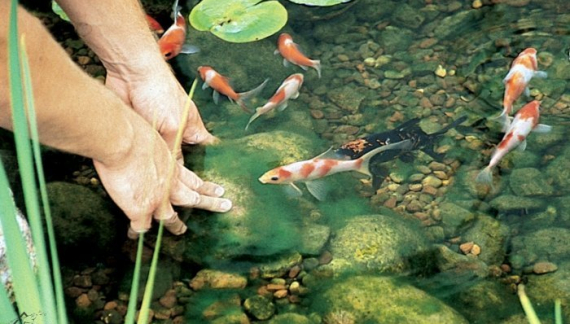 Controlling algae is a matter of creating an ecosystem with balanced water. Too many nutrients in your pond give algae something to feast on. Remove the excess nutrients and algae won’t be able to thrive so easily. When you do experience an excess of algae, treat accordingly with one of the effective Aquascape algae-fighting options. What is Suspended Algae?
Suspended algae are single-celled algae that are able to reproduce at a rapid rate, quickly turning water green and cloudy when left unmanaged. Due to the small size of the algae cells, most common filtration media is too porous to catch and remove them. This form of algae is commonly referred to as ‘pea soup’ for the murky green water it produces.

Suspended algae blooms are typically caused by an imbalance in the water. Factors like too much sunlight and excess nutrients can lead to issues with floating algae growth. Excess nutrients in the pond are often caused by overfeeding fish, stormwater runoff, stocking too many fish, or a lack of proper pond filtration.

Suspended algae blooms often occur in the spring when the season is beginning to change, but the water remains at lower temperatures. Low water temperatures will prevent aquatic plants and fish from becoming active, leaving algae as the only organism actively contributing to the ecosystem at this time. Therefore the suspended algae aren’t competing with fish and aquatic plants for their food source, allowing it to thrive.

A spring suspended algae bloom may clear up in as little as two weeks once the temperatures raise enough for the beneficial bacteria to colonize in the rocks and biological filter. Warmer water temperature also awakens aquatic plants from dormancy, creating competition for suspended algae as the plants begin to consume nutrients in the water feature. If the problem does not resolve itself with the arrival of warmer temperatures, there are several methods to successfully control this type of algae bloom.

Sunlight has an immense impact on your water feature. Too much direct sunlight can lead to problems with single-celled algae. Provide shade on the pond’s surface as soon as possible by adding aquatic plants, such as water lilies and floating plants like water hyacinth. The additional shade provided by these plantings will help to diminish the possibility of green water. Adding marginal pond plants also helps to reduce algae growth by competing with the algae for nutrients. Popular choices include bloody dock, pennywort, aquatic mint, corkscrew rush, pickerel, water iris, canna lily, and more.

A common mistake made by pond owners is overstocking and overfeeding pond fish throughout the season which can initiate algae problems. Pond fish, such as koi and goldfish, should only be fed an amount of food that they can consume in five minutes or less. Any leftover food should be removed after feeding. Having too many fish in a pond can also contribute to issues with green water due to an increase in waste production. A good rule to follow is having at least 10 gallons of water for every inch of fish in the pond. So, if you have a 500-gallon pond, you shouldn’t have more than 50 inches of fish total. Keep in mind your fish will grow, so take that into consideration when adding younger fish.

Another important factor to consider is the possibility of the introduction of chemicals or nutrients to the pond from outside sources. There are several ways that nutrients or chemicals can find their way into your water feature, including storm water runoff and lawn fertilizer. If you notice an abrupt case of algae growth, check to make sure your water is not being infiltrated by outside contaminants. This can occur through a leak or from nearby chemical spraying. What is String Algae?
String algae are filamentous algae often found attached to surfaces in the water feature, such as rocks and plants. Excessive string algae growth can become frustrating if left untreated. Therefore, it is important to take the proper steps to prevent excessive growth in your water feature.

Similar to suspended algae, string algae blooms are also caused by an imbalance in the water feature. Excess nutrients and sunlight are common culprits in their development. String algae spores are quite durable, and therefore, this form of algae can reproduce easily, as you may have already noticed.
Prevention and Solutions
Reduce the amount of excess nutrients in the pond in order to prevent string algae growth. Don’t overfeed your fish, remove uneaten food, and do not overstock your pond with fish. Taking these proactive steps will help to reduce the possibility of a string algae bloom.

Like suspended algae, excess sunlight can lead to issues with filamentous algae. Prevent an increase in sun exposure through the addition of aquatic plants. We recommend covering approximately two-thirds of the water’s surface with plants such as water lilies and planting several taller plants along the margins of the feature to provide effective shade.

The addition of aquatic plants helps to reduce algae growth by competing for nutrients in your water feature. The plants in your feature will consume excess nutrients and help to prevent string algae blooms from occurring throughout the year.

If filamentous algae are growing in your pond, you may use your hands or a pond skimmer net to physically remove the growth. Be sure to remove growth quickly and carefully as it is possible for string algae spores to be released into the water at this time. You can even use scissors to help expedite its removal.