Why Oxygen Is Important to a Pond Ecosystem

Oxygen is one of, if not the most vital element on the face of the earth. Read any science journal or search the internet. You won’t find anyone who disputes that fact. Oxygen is vital to many different organisms on earth, not just humans. 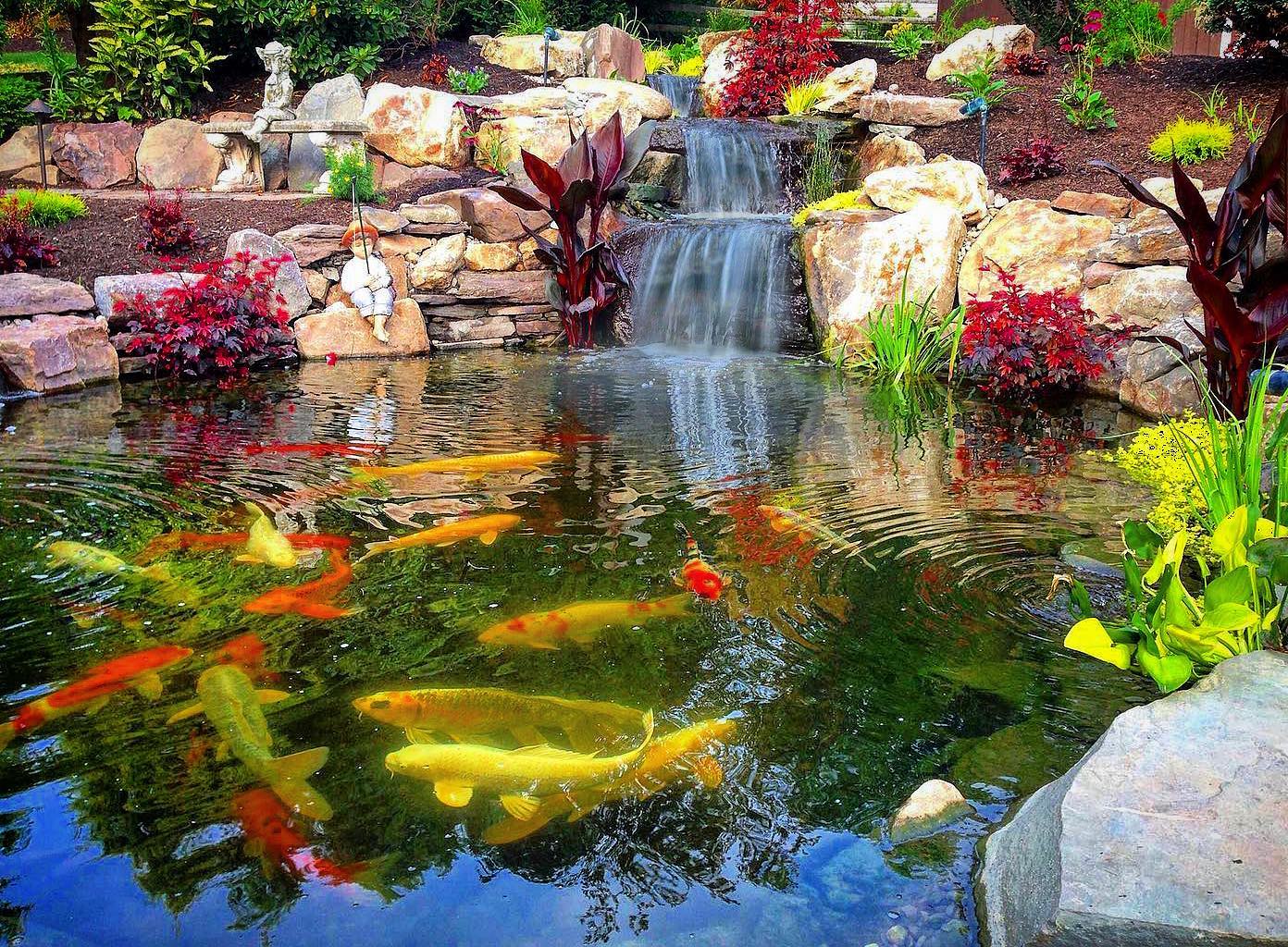 Pond fish and aquatic plants are no different. They just get the oxygen from a slightly different source than we do. They get oxygen from the water, so your pond is bursting with life because of the oxygen in and around it.

How Does It Get There?

The formula for water is H2O, but the formula’s oxygen contribution alone isn’t the only oxygen present in your pond. Just because oxygen is a part of the formula, doesn’t mean there’s enough of it to sustain aquatic life. The oxygen in a pond actually comes from several different sources, but the most common is good old-fashioned absorption.

Oxygen from the atmosphere is absorbed into the water. Agitation at the surface and splashing (as in a waterfall) increases the absorption of that oxygen into the water because of the expanded surface area created. 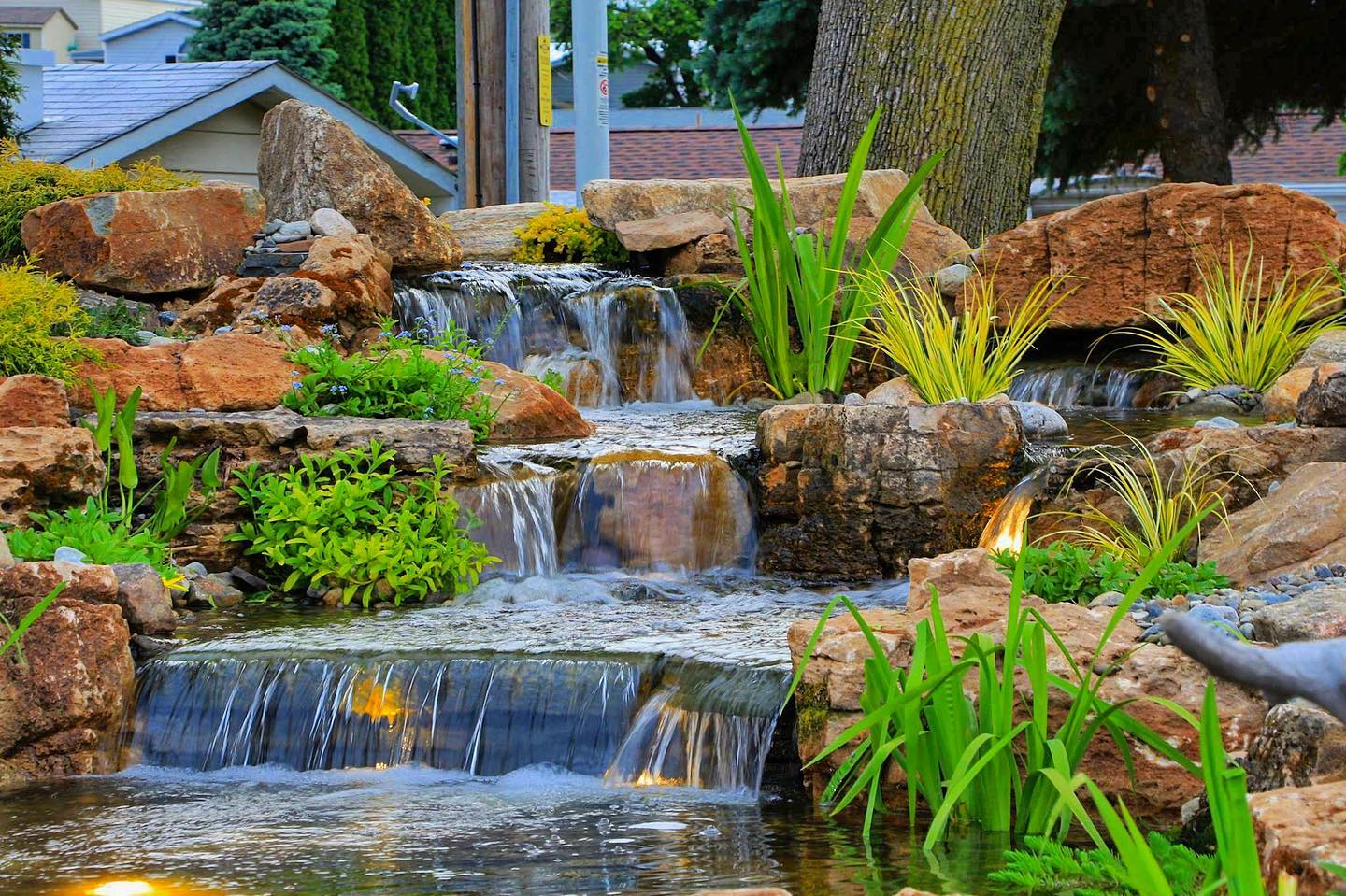 Another way that oxygen gets into the water is through aquatic plants, but you can’t rely on aquatic plants to do all the work. Plants with submerged foliage can produce massive amounts of oxygen. When the sun shines on them, they use carbon dioxide and produce oxygen. But plants don’t grow much by day, so they store that energy. When they grow at night, they use that stored energy, producing carbon dioxide and using up precious oxygen. In other words, when nighttime falls, submerged plants (also known as oygenators) are not your fishes’ friends.

Some of the best oxygenators are fast-growing plants with lush foliage that grow under the water line, including anacharis, elodea, and cabomba, as well as a not-so-favorite plant, algae.

Once the oxygen is present in the water, it is used by aquatic plants and animals for respiration. Respiration is key to their growth and survival. Oxygen is even used by bacteria to help break down dead plant material. So how much oxygen is needed for fish to survive? Minimum levels should be at 5 parts per million (PPM), allowing the fish to live a few days, but levels of 8 PPM would be more desirable. Levels of 11 to 14 PPM are the best. Keeping fish means maintaining a suitable oxygen level. It’s certainly as important as the very water in which they live – water is not enough.

Pond owners in colder climates don’t have the enjoyment of a long pond season like their southern counterparts. But in the case of oxygen levels in backyard water features, they’ve got a bit of an edge. In case you don’t remember from Chemistry 101, colder water (under 60° F) dissolves or carries more oxygen. That’s why it’s important to make sure you add oxygen to a pond during the hot summer months. You can accomplish this with a pond aerator.

Regardless of whether you’re in a warm or cool climate, you’ll want to be careful with your fish during cleanouts. Putting fish in a tank or tub in the heat of summer for a cleanout can be risky. If you don’t aerate the temporary holding tank, or if the tank is in the sun and heating up, your fish may be in danger due to low oxygen levels. Add a small aerator to the holding tank if the water reaches 75° F or higher. For added insurance, place the holding tank in a shady spot for the fish to hang out while you do the dirty work! Better yet, be sure to perform cleanouts in the spring when the weather is cooler.

Where Does Oxygen Go?

Hot weather isn’t the only villain in the dissolved oxygen saga. There are a few common ways that pond oxygen levels get reduced. The most obvious is fish and plant respiration, which is why it’s so important to make sure you don’t overstock your pond.

Pond fish typically need 10 gallons of water for every inch of their length, but keep in mind they will grow larger over the years. So no matter how tempting it might be to add just a few more fish, be careful not to overstock! Some pond experts even go so far as to recommend only ½ inch of fish per 10 gallons of water as a maximum stocking density.

Bacteria are also culprits in oxygen respiration, and beneficial bacteria have especially voracious metabolisms when it comes to consuming oxygen. Your pond’s bacterial flora consumes more oxygen than your fish could ever attempt. So basically, the very things you need and want in a pond consume the most oxygen.

Less common ways that may cause dissolved oxygen levels to fall include decaying algae, treating a pond with chemicals, and the depth of the pond. Algae eats up oxygen as it rots away, consuming massive amounts of the precious element. The use of certain chemicals in the pond for treating fish diseases can consume a lot of oxygen. If your fish are sick, you should keep an eye on the oxygen level of the water. It’s a good idea to agitate the water while treating the fish.

The depth of a pond also plays a role in the available oxygen in the pond. Ponds over five feet deep, for example, will have low dissolved oxygen levels at the bottom.

If you catch fish gasping for oxygen at the surface of the water water, especially during warmer months of the year, you’ll want to add oxygen into the pond with an aerator or a submersible pump like the Pond Powerhead.

Ponds are meant to be a relaxing oasis, providing relief from the troubles of the day. The more you can work with nature to provide a healthy habitat, the less maintenance a pond will require. This is why Aquascape follows an ecosystem approach to ponds by incorporating a proper balance of filtration, circulation, fish, plants, and rocks and gravel.

To learn more about pond ecology and Aquascape ponds, be sure to check out Aquascape University for everything you need to know. Some of the courses are free and learning is self-paced so you can take courses when it’s convenient for you!